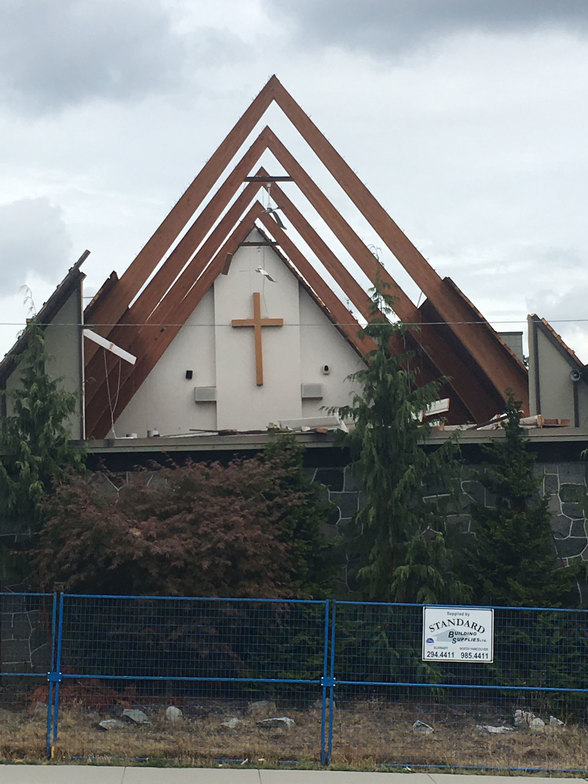 This photo was taken just after the roof had been removed to allow for some of the beautiful wooden beams from the Sanctuary to be removed, stored, and later placed into our new building as a gesture of continuity with the core faith of our forebearers. The openness pictured here is a hint of the light, spaciousness, and welcome that is our intention for our new venture.

We are grateful to the BC Conference Property Development Council of the United Church of Canada, along with BC Housing for working together with us at Como Lake United Church in order to substantially increase the supply of affordable rental housing. The brand new building will consist of 75 rental units for individuals and families and will include two levels of underground parking, some garden level suites, and 32 units are designed to be fully accessible.

Work stared in 2018 and  as you can see when you drive by, it is in progress.

A bit of history:

Activity in the Como Lake area of Coquitlam began with families meeting in homes in the area in 1924. A small wooden church was completed on Austin Avenue in 1926 and named Central United Church. In 1951, with the congregation growing, the church moved to a new location on King Albert and Marmont Streets. In 1956 the Congregation voted to change the name to Como Lake United Church.  In 1960 a new sanctuary was built to accommodate growth and was dedicated on December 4, 1960. Major expansions were completed in 1976 and 1986. The buildings have been home to many groups within the church and from the wider Coquitlam area who have contributed to the well-being of individuals and community.