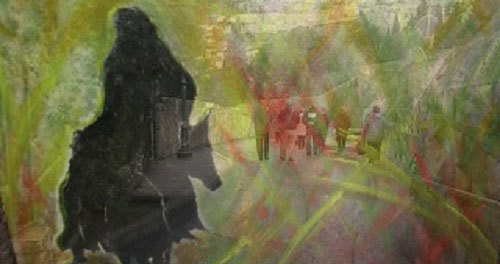 For Palm Sunday, April 14, 2019  we contemplate on PRAISE - for what in your life (big things and little things) do you most want to praise God?

On the outskirts of Jerusalem
the donkey waited.
Not especially brave, or filled with understanding,
he stood and waited.

How horses, turned out into the meadow,
leap with delight!
How doves, released from their cages,
clatter away, splashed with sunlight.

But the donkey, tied to a tree as usual, waited.
Then he let himself be led away.
Then he let the stranger mount.

Never had he seen such crowds!
And I wonder if he at all imagined what was to happen.
Still, he was what he had always been: small, dark, obedient.

help me praise you today

in all I do and say

11 When they were approaching Jerusalem, at Bethphage and Bethany, near the Mount of Olives, he sent two of his disciples 2 and said to them, “Go into the village ahead of you, and immediately as you enter it, you will find tied there a colt that has never been ridden; untie it and bring it. 3 If anyone says to you, ‘Why are you doing this?’ just say this, ‘The Lord needs it and will send it back here immediately.’” 4 They went away and found a colt tied near a door, outside in the street. As they were untying it, 5 some of the bystanders said to them, “What are you doing, untying the colt?” 6 They told them what Jesus had said; and they allowed them to take it. 7 Then they brought the colt to Jesus and threw their cloaks on it; and he sat on it. 8 Many people spread their cloaks on the road, and others spread leafy branches that they had cut in the fields. 9 Then those who went ahead and those who followed were shouting,

“Hosanna!
Blessed is the one who comes in the name of the Lord!
10     Blessed is the coming kingdom of our ancestor David!
Hosanna in the highest heaven!”

11 Then he entered Jerusalem and went into the temple; and when he had looked around at everything, as it was already late, he went out to Bethany with the twelve.

5 Let the same mind be in you that was[a] in Christ Jesus,

6 who, though he was in the form of God,
did not regard equality with God
as something to be exploited,
7 but emptied himself,
taking the form of a slave,
being born in human likeness.
And being found in human form,
8     he humbled himself
and became obedient to the point of death—
even death on a cross.

9 Therefore God also highly exalted him
and gave him the name
that is above every name,
10 so that at the name of Jesus
every knee should bend,
in heaven and on earth and under the earth,
11 and every tongue should confess
that Jesus Christ is Lord,
to the glory of God the Father.