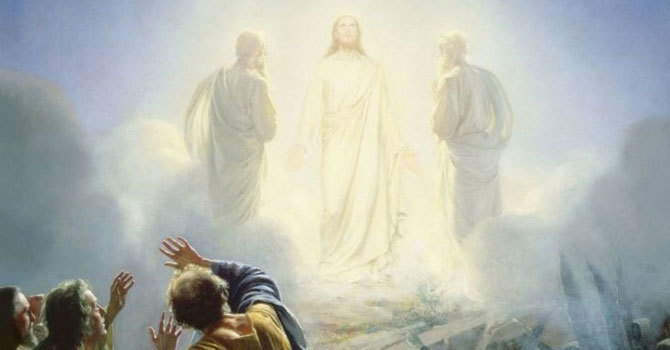 2 Six days later, Jesus took with him Peter and James and John, and led them up a high mountain apart, by themselves. And he was transfigured before them, 3 and his clothes became dazzling white, such as no one[a] on earth could bleach them. 4 And there appeared to them Elijah with Moses, who were talking with Jesus. 5 Then Peter said to Jesus, “Rabbi, it is good for us to be here; let us make three dwellings,[b] one for you, one for Moses, and one for Elijah.” 6 He did not know what to say, for they were terrified. 7 Then a cloud overshadowed them, and from the cloud there came a voice, “This is my Son, the Beloved;[c] listen to him!” 8 Suddenly when they looked around, they saw no one with them any more, but only Jesus.

The Coming of Elijah

9 As they were coming down the mountain, he ordered them to tell no one about what they had seen, until after the Son of Man had risen from the dead.

12 The Lord said to Moses, “Come up to me on the mountain, and wait there; and I will give you the tablets of stone, with the law and the commandment, which I have written for their instruction.” 13 So Moses set out with his assistant Joshua, and Moses went up into the mountain of God. 14 To the elders he had said, “Wait here for us, until we come to you again; for Aaron and Hur are with you; whoever has a dispute may go to them.”