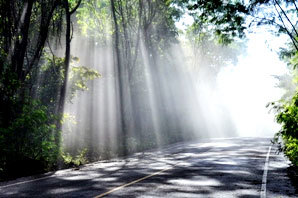 The Son of God Is Better Than Everything Else

15 The Son is the exact likeness of God, who can’t be seen. The Son is first, and he is over all creation. 16 All things were created in him. He created everything in heaven and on earth. He created everything that can be seen and everything that can’t be seen. He created kings, powers, rulers and authorities. All things have been created by him and for him. 17 Before anything was created, he was already there. He holds everything together. 18 And he is the head of the body, which is the church. He is the beginning. He is the first to be raised from the dead. That happened so that he would be far above everything. 19 God was pleased to have his whole nature living in Christ. 20 God was pleased to bring all things back to himself. That’s because of what Christ has done. These things include everything on earth and in heaven. God made peace through Christ’s blood, by his death on the cross.

68 “Give praise to the Lord, the God of Israel!
He has come to his people and purchased their freedom.
69 He has acted with great power and has saved us.
He did it for those who are from the family line of his servant David.
70 Long ago holy prophets said he would do it.
71 He has saved us from our enemies.
We are rescued from all who hate us.
72 He has been kind to our people of long ago.
He has remembered his holy covenant.
73     He made a promise to our father Abraham.
74 He promised to save us from our enemies.
Then we could serve him without fear.
75     He wants us to be holy and godly as long as we live.

76 “And you, my child, will be called a prophet of the Most High God.
You will go ahead of the Lord to prepare the way for him.
77 You will tell his people how they can be saved.
You will tell them that their sins can be forgiven.
78 All of that will happen because our God is tender and caring.
His kindness will bring the rising sun to us from heaven.
79 It will shine on those living in darkness
and in the shadow of death.
It will guide our feet on the path of peace.”