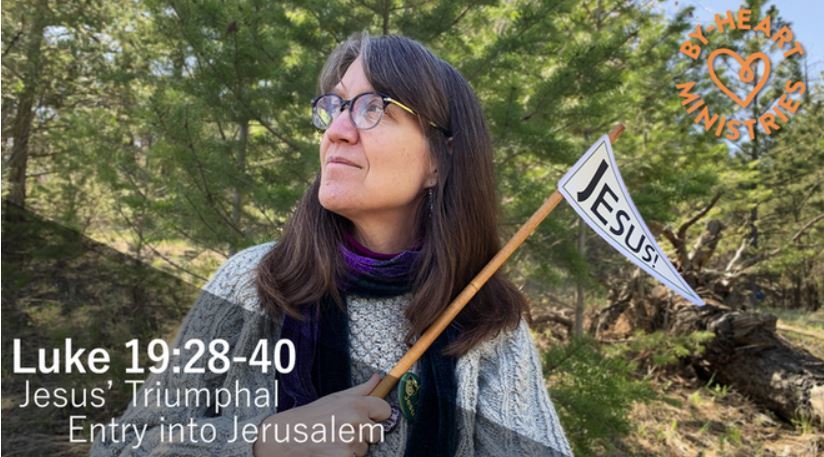 We met Nora on the road up Cartwright Mtn behind our house, me and Isaac. We were heading up to find some kind of place to record this story of a path from the Mount of Olives and the loud, joyful Jesus followers who were throwing their cloaks on it.

Nora hasn't been to church since lockdown began, and she and I both know that our reason for hesitating to go back isn't just fear of COVID. It's also a kind of paralysis that has set in. A new safe routine. A pattern that was undergirded by fear in past and now just feels like ... stuck. A glass wall.

There is only one scene I remember from the movie "Papillon". It is the man who was imprisoned in a penal colony in French Guiana, in the smallest hut ever, who spent his time within its narrow walls walking, day after day, the exact same number of footsteps, over and over and over again. He knew that pattern with his whole being. He was practising for freedom. Still - when he was finally allowed to walk out of that hut, he took that very number of footsteps - and fell to the ground.

I wonder how that multitude of Jesus' disciples was able to embrace the freedom they saw in him - to praise God joyfully with a loud voice, call out the deeds of power they had seen, and announce peace in heaven - after such a long time of living in cramped spiritual quarters.

I'm pretty sure Jesus knew that his disciples didn't understand exactly what that new freedom really was made of - that they misunderstood the kind of kingdom he was proclaiming. But perhaps we all have to start from where we are, to be able to make sense of something outside our frame of reference. And if we see these Pharisees as actually being supportive followers of Jesus too, which Luke seems to suggest, we'll know that they are being protective of him and their people when they tell him he should quiet the crowd. They too are stuck. I don't blame them.

Nora and I have a plan to go to church together on Sunday. If one of us falls over when we step into the sanctuary, we'll lean on each other, I figure. One way or another, I'm not going to leave the shouting to the stones.