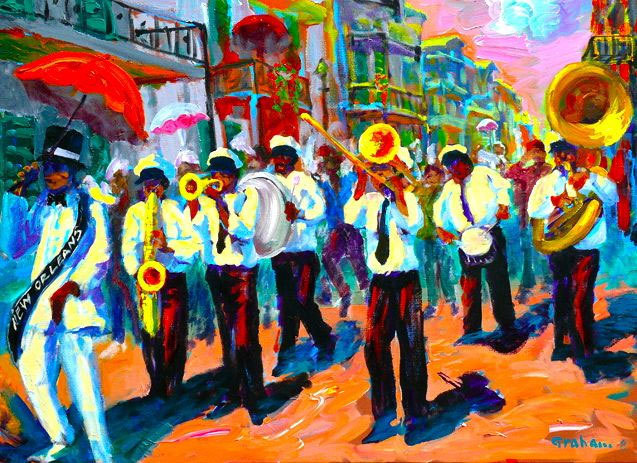 WHEN THE SAINTS GO MARCHING IN,

a song with strong hints of redemption and salvation.

The challenging question is, “Who wrote it?” — a trick question to which the answer is, “No one knows.”

Saints seems to have existed in the sultry air forever, filling the spaces between the cathedrals and the cathouses like another song of uncertain origins, House of the Rising Sun.

Some music historians shrug off the authorship question, saying only that Saints probably started as a spiritual sung by slaves longing for the day they’d see their loved ones in heaven, and it evolved into a post-Civil War gospel song.

A different theory, offered by jazz scholar Thomas Cunniffe, is that the song may have been inspired by a chant in the Catholic requiem mass.

After a funeral, mourners would gather at the graveside where a choir chanted In Paradisum. The Latin translates as: “May the angels lead you into Paradise,” and, significantly, “May choirs of angels receive you and lead you to where Lazarus is poor no longer.”

Brass bands in the late 1800s established the tradition of the “jazz funeral,” accompanying mourners through the streets to and from the cemetery.

Cunniffe suggests that they may have riffed on the opening notes of In Paradisum, while leading the procession out of the cemetery, improvising into creation the hymn we know as “When the Saints Go Marching In.”

The first known recording of Saints was by the Paramount Jubilee Singers in 1923, a sad, wistful version. A published version appeared in 1927 in Spirituals Triumphant — Old and New, edited by Edward Boatner, born in New Orleans, the son of a preacher who had been a slave. A blues version of the song by Blind Willie Davis was recorded in 1928.

The hymn burst out of New Orleans after it was recorded for Decca by Louis Armstrong in 1938. He’d learned it as a “traditional gospel hymn” and played it on a tinny cornet at the Colored Waifs Home, where he was sent numerous times as punishment for delinquency.

Armstrong’s version for Decca was decidedly upbeat. In his introduction, he parodied terminology from churches he called “Holy Roller.”

“Sisters and Brothers, this is Reverend Satchmo, getting ready to beat out this mellow sermon for you. My text this evening is ‘When the Saints Go Marchin’ In.’ Here come Brother Higginbotham down the aisle with his tram-bone. Blow it, boy.”

His sister, known locally as Mama Lucy, wasn’t happy about this. She accused Armstrong of “tarting up a piece from the church.” Pretty much everyone else loved it.

The Dixieland revival of the mid-1940s promoted the hymn to “jazz standard.” After that, it was covered by, well, everybody and their brother. The New Orleans Saints and dozens of other sports teams started using the song, or a variation, to pump up their fans after a goal.